Jeanne Sarah Hansen (Mayer) of Broomfield, Colorado, passed away peacefully, with her family at her side on March 17, 2020, at St. Anthony’s North Health Campus due to complications with COPD and Pneumonia.

Jeanne was born March 12, 1944, in Los Angeles, California, to Betty and Edward Mayer. During Jeanne’s younger years, she enjoyed spending a lot of time at the beach in Santa Monica, CA, with her best friend Leslie, where she attended Santa Monica High School.

Jeanne married Wade O. Hansen Jr in August of 1967 and divorced in 1980. She had two beautiful children Wade O. Hansen III and Danielle K Hansen, and was a very caring a devoted mother to both of her children.

Jeanne was self-sufficient and very strong-willed. She was a talented artist and photographer and enjoyed coloring, painting, and creative photography. Jeanne loved to go on cruises and travel to visit family. She visited many places over the years, traveling with family and friends. One of her favorite moments was being able to swim with the dolphins. She also enjoyed a glass or two of wine, as she was always the life of the party.

Jeanne worked as an Executive Assistant for The Bohle Company for 22 years until she retired in Marina del Ray, CA, after having a full mastectomy due to cancer cells in her lymph nodes. Jeanne struggled with several different medical issues over the years but always came back from the medical issues, as she was a fighter.

Those who knew Jeanne, know of her giving heart. If it was the gift of advice, the gift a few dollars, or just the gift of her ear, she was always there. Jeanne always gave everything she was to anyone she came into contact with and even more to those she loved. She would never shy away from speaking her mind or letting those know how she was feeling.

In the last few days of her life, she had the precious gift of having all her grandchildren together for the first time. She will always be remembered for the loving, caring, and giving woman she was. As her final gift, she donated skin grafts to be used in aiding women who struggle with reconstruction surgery after mastectomies as well as burn victims.

Jeanne is proceeded in death by her father Edward J. Mayer, her mother, Betty L. Mayer as well as her brother Jim Mayer. Jeanne is survived by her son Wade (Sunny) Hansen III, daughter in law Aimee Hansen of Broomfield, CO, her daughter Danielle (Dani) Woodhull, son in law Michael Woodhull Jr., of Marysville, WA her four grandchildren Devon Lowe of Marysville, WA, Meghan Hansen, Madison Hansen and Trevor Hansen of Broomfield, CO. She also leaves behind her nephew Justin Mayer of Prineville, OR, and many cousins and other family members.

Jeanne’s wishes were to be cremated, and her son and daughter will be making plans to spread her ashes at a later date.

In lieu of flowers, the family asks that you please plant a tree in Jeanne’s name as the tree of life was a significant symbol to her or donate to a cause you feel is close to your heart.

We make a living by what we get.

We make a life by what we give.

Jeanne was a giver, she gave her love,

her friendship and her compassion

to all those she met and loved.

Today she gave for the last time,

the most precious gift of donation.

To register to become a donor, please visit: www.DonateLife.net 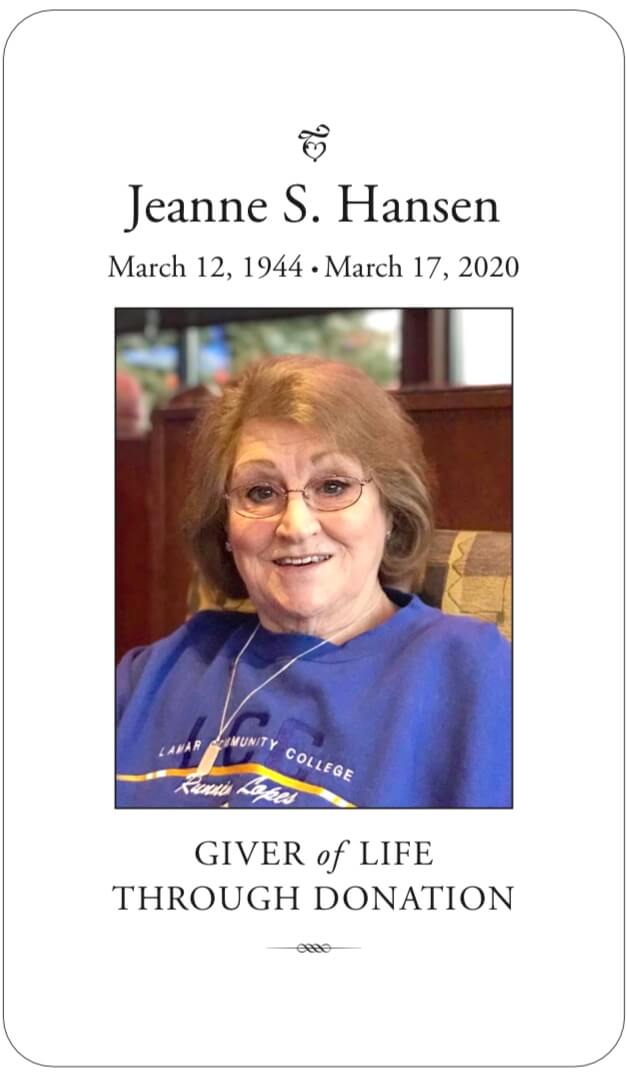 To send flowers to the family or plant a tree in memory of Jeanne Sarah Hansen, please visit our floral store.

You can still show your support by sending flowers directly to the family, or by planting a memorial tree in the memory of Jeanne Sarah Hansen
Share a memory
© 2020 In Memoriam. All Rights Reserved. Funeral Home website by CFS